A success story in itself, part of the Starling School building once served as the childhood home of current director Jennifer Howard-Black. Her mother was raised in the home too, and has now worked at the school for all of its 45-year history.

Jennifer’s grandmother Viola Starling was the family visionary and founder of Starling School. At just 18-years-old, she instilled enough confidence in a local banker that he gave her a loan to help open the school. Being the forward thinking businesswoman that she was, Mrs. Starling had the foresight to include their family home in the business plan, eventually making for a seamless expansion as the popular pre-school grew.

Jennifer’s grandfather Jimmy Lee Sr. worked on railroads and helped build St. Pete’s Holocaust Museum building. While he didn’t have a chance to complete formal schooling, education was a parenting priority for him, and he worked hard to create opportunities and encourage education for all his children. That value is still alive and present today, both in the Starling School and the lives of the family that runs it.

Starling’s teachers are deeply invested in the community they are a part of. One current staff member is even a graduate of Starling – in fact, many graduates of the  School have gone on to accomplish notable achievements locally and across the country, becoming doctors, attorneys, teachers, pastors, elected officials, and many more diverse careers. Whether returning as staff, parents, or supporters, a deep roster of Starling’s thousands of graduates maintains a connection with the school. 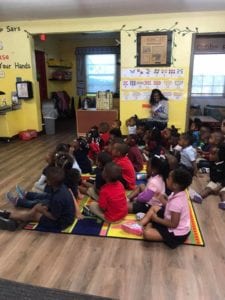 Center Director Ms. Jennifer credits the successes of the school and its students to a focus on social and emotional intelligence, coupled with a commitment to reading and language. “There is so much that can be done to teach literacy, regardless of income – we want to do our part to help make language-rich environments comfortable and consistent, to close the achievement gap. We understand it takes a village – at Starling we develop true partnerships with parents and together focus on whatever is best for that child to thrive.”

Starling School & Day Care Center has been family owned and operated for four generations and is currently serving more than 80 children. With thanks to a “graciously supportive community” of organizations and individuals, some property enhancements are currently underway including a brand new butterfly garden!